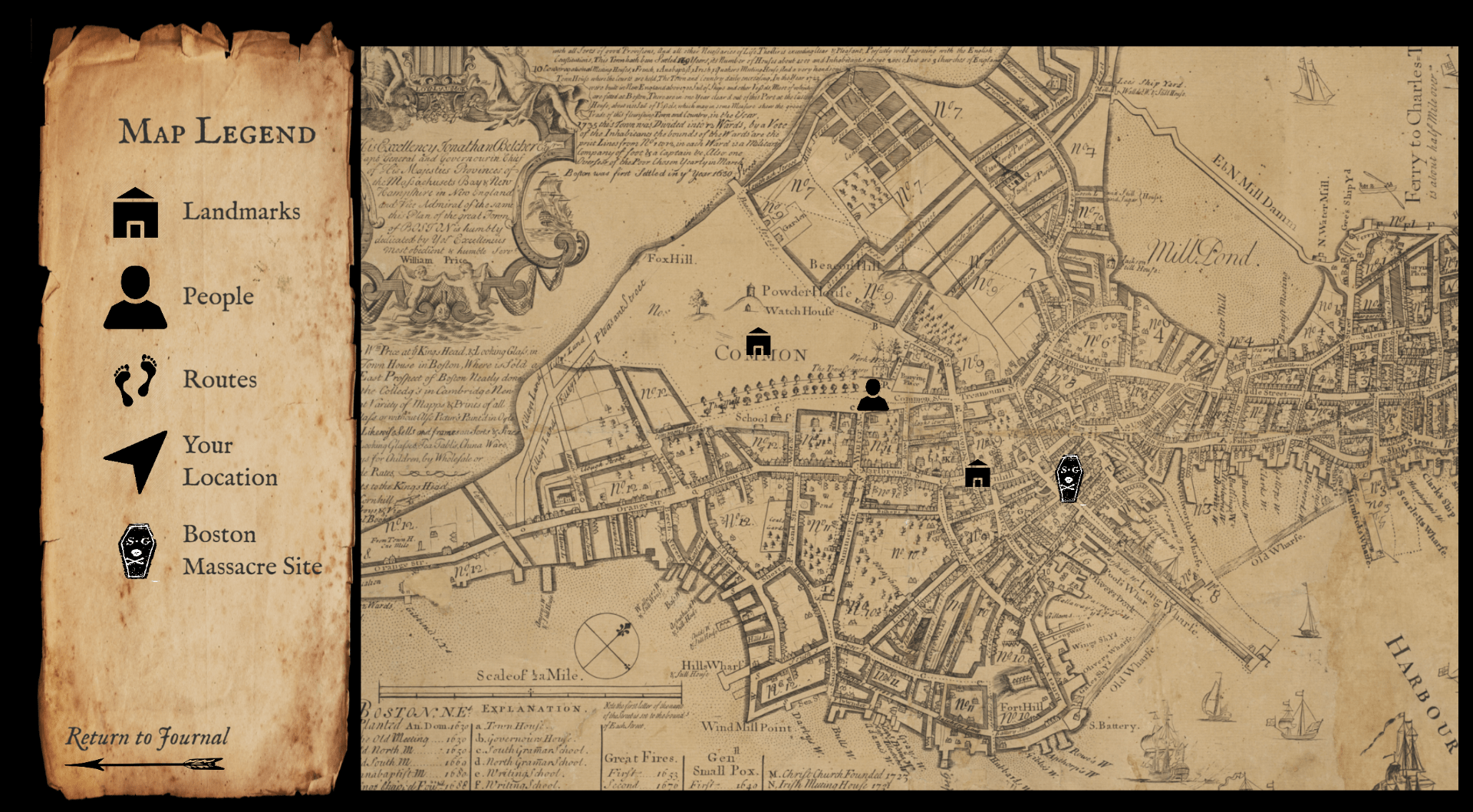 I chose to join the mapping team because I wanted to learn ArcGis. I ended up not using ArcGis a single time. However, the skills I learned using Unity made me feel more confident in myself as a coder and gave me a newfound appreciation for the digital humanities.

As a member of the mapping team, our goal for the term was to create an interactive and engaging map the player could use for navigation. We hoped to create a legend, integrate our mapping data and add content, and add basic user interface features such as pan/zoom and map icons.

We began the project with a static image of a map in the journal:

By the end of the term, our map looked like this:

The first step to creating our map was creating a legend. Using Photoshop, we added icons for the different categories of features we hoped to add (landmarks, people, routes, current player location, and the Boston Massacre site). The last time I had used Photoshop was in seventh grade so my skills were rusty to say the least. Luckily, Aaron was able to re-teach me the basics.

I then had to add and organize the icons and text into a map legend. This where I learned the first and perhaps biggest lesson of the class: user interface is time-consuming, nitpicky, and frustrating. I spent the first five weeks of the term simply positioning the legend, scaling the icons, and aligning the text to make it look nice.

After creating a legend, I began adding icons to the map. I made them buttons and animated them with a banner to display the name when the player hovered over it with a mouse. Aaron wrote a script that added pan/zoom functionality. I wrote a script that toggled the icons in the map on and off when they were clicked in the legend. Finally, I connected the journal scene to the maps so that the player could transition between the different scenes.

Things this project has taught me:

Working on this project has been very empowering and confidence-boosting. At times, it has certainly been frustrating and draining when I couldn’t figure out the error in a script or the icons refused to scale correctly. However, the feeling I got when I finally figured it out made it all worth it and I am proud of the final result. Going forward, we still have a lot of work to do. I want to make the map render better when zoomed in, resize the icons when zoomed, and actually be able to integrate real content. This gives me all the more reason to be excited about hopefully continuing this line of work in the digital humanities lab next term!